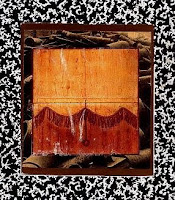 In my path was a box of diaries, the first 67 notebooks. Being allowed almost nothing but idleness in the extraordinary heat of late July/early August, I picked up a book at random and started reading: it was 1990 (the cover is above). That’s a year I could never read before. I was trying to be hopeful in a bad situation around a negative person. The diary gave me an interesting perspective on today.

An artist was all I wanted to be; it was the obsession. A Working Woman in New York City, I instead maintained a wannabe status, if only in my mind. Help and time was the ultimate Nirvana. My boyfriend told me that any help came with strings attached and the whole thing was impossible anyway. He said he had given up the game and didn’t even want to go to openings, which was sort of odd because that was where we met. My response at the time was that my job at Bergdorf Goodman had all kinds of strings attached anyway - I can dream, can’t I?

The Lonely Metropolitans No. 1

In this blog I don’t say half of what my life is like but let’s just say that I am a part of the global economic freefall. But to read of the impossibility of an art career, in light of the present - despite the freefall - gave me great hope and a strange satisfaction. I beat the odds.

By the time I got out of that stupid relationship, I did not even dream of being an artist. I got very sick along the way and that dream was a luxury I could not afford. The dream was so much kicked out of me that when Katherine Dunn brought it up upon my return to Portland, I burst into tears.

- So it blew my mind to read how “impossible” a real art career was and that all these years later, I had it. There isn't even room for anger at the ex-lover because the reality of a life in art – my own and others - is so strong, I was almost shocked and surprised when I read it. I am not in touch with him at all.

When in San Francisco last year, I actually ran into the woman who introduced us and encouraged the match. “Hi, remember me? Remember him?” As if I could ever forget. I was speechless and cold as ice unfortunately.

The Lonely Metropolitans No. 2

The same year – 1990 – I made a series of photomontages called The Lonely Metropolitans (subtitled We Dream of Leaving the Ghetto). The title is of course borrowed from the famous photomontage by Herbert Bayer.

By then I had lived in NYC for 4 years. I was well into my 30s but still slept on the floor to make room for work. During this year I also had surgery and the recovery gave me time to think – about art, love and compromise, work, money. The collages are the direct result of the introspection. Many unsaid things floated on an elevated circuit in my inner life. Just which ghetto did I want to leave? The bed on the floor? The ditch in these works was almost where I ended up. By 1991 I was so sick I thought I was dying. In some ways the collages articulate the letting go of the art dream. Mission Impossible as it turns out.

The Lonely Metropolitans No. 3


I never really commented on that work at that time. It wasn’t discussed with anyone and they were not shown. These days I tend to think that “art is a conversation” - if that’s the case, then this work did not exist! The years passed, the relationship and situation came to a close and I never really looked back at that work. I think that’s because the images – like the Targets of today – were so “obvious” to me. The personal and private holocaust just seemed like something you did not have to explain. But of course that’s not really true.

All of this was on my mind when I received out of the blue an email from Robert Tomlinson, a curator who was putting together a group show at the Jupiter Art Center in Centralia, Washington. It just seems completely remarkable to me - and maybe it’s not - but which pieces did he want to show? The Lonely Metropolitans. If he had asked me just two days before, it would have been like an archaeological project. But there I was, sorting through the diaries which held their naissance almost 20 years ago.

The Lonely Metropolitans No. 4

The show is called Portland Photography, which I love because I am not really a photographer. I am in good company including Sika Stanton, Grace Weston, Heidi Kirkpatrick and Loren Nelson. The Lonely Metropolitans are there, perhaps possessing the oldest bits of paper to grace the room: every single one has pieces from 1933 issues of Die Woche, a German magazine reeking of Nazism without ever displaying one swastika. It oozes sepia in every ditch, bootstrap and hungry child.