My foray into the commercial gallery system isn’t linear and anything solid is still fairly recent. I have shown in just about every kind of space you can think of, prisons and hair salons included. Anyone who reads this blog knows I did a lot besides make art. Years ago when the galleries suggested I deliver a biography (as opposed to an exhibition history) I dove in, but I wrote no simple tale.

- And what I eventually delivered was called “Career Suicide.” Such a suicide that after much hand wringing and by mutual agreement, we ditched it.

As it was, I never listed oh so many things. Like that I worked for the York Archaeological Trust, washing and cataloguing pottery shards and ancient bones as head of the finds for a Roman site. Or that I made a recording for the Trap Sampler (Drum Bunny), produced by Greg Sage. Nary a mention of makeup of course, and forget all the body painting too. All of that wouldn’t be pertinent.

But it was also decided that so much of the curating, art dealing, radio interviewing and whatever art activities I crammed in was also “Career Suicide” – because all this meant I wasn’t in the studio, right?

Well I suppose if all the fuss is about abstract oil paintings, it makes sense. Though I disagree, an argument can be made that contemporary painting is about painting. It lives in its own universe, by its own rules.

But thank God you couldn’t say the same about the Targets! They possess the biography, right down to archaeology, art history and lip gloss. It’s like she came out of the closet.

I touched on all of this vaguely in a previous post, Her Pop Autobiography. At the time, it felt more like a recount of facts and history which did not perform as allies. Not so today. I want to thank everyone who came and everyone who wrote about this exhibition.
Richard Speer on Art LTD
Lisa Radon on Ultrapdx
Jeff Jahn on PORT
Bob Hicks on Art Scatter
Two Coats of Paint
Bunny with an Art Blog
OPENWIDEpdx: Show of the Month
OZON: Babes in the Target
Vincent Romaniello
Redefine Magazine 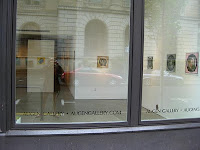 Cary, you gave me some interesting insight about this body of work, showing in P-town, etc. It created a conversation of its own before it hit the walls - and you wanted to show it from the start, when I only had a few pieces made. I want to thank you for all of that!

Thanks Lisa. I remember a conversation we once had about whether one should mention in the art world (...much less include on a bio...) the fact that one does makeup or worked in fashion. I liked the way writers such as yourself were able to refer to it without dwelling on it as regards this exhibition; many things inform a piece of art.

wish i'd been to see it- i remember seeing a show of these in sf in the 80's, a little more abstract than what is in this show now.
the comment i want to make has something to do with painting and elitism- i really think it no mark of special talent to be granted the privilege of daily studio practice these days- wtf are the standards? as far as i can tell, having a trust fund and knowing the right people are the best strategies to a consistent studio practice, though if one is willing to jetison all other aspects of a healthy and balanced life, one might, without eating much, also be able to put in substantial studio time......mea culpa.
i think people who are full of LIFE in all its aspects are going to be more interesting as artists.
"art teaches nothing except the significance of LIFE"
(capitals mine)

oops- the last quote is from Henry Miller