Lately I’ve been thinking about the target, and collecting them. My love for them was once large, when I started with small ones in collage and went into big ones, which were colored not all that differently from how I paint today. I don’t even have photographs of the big ones, which all belong to someone else now, and wish I did. Perhaps I am just not done with them.

Sure, you can talk about Jasper Johns; Vale of Research used to say the same name to me in the 80s, taunting me. But I’m not worried. We get to have our obsessions. I mean does Malevich and Albers own the square? Certainly not. Plus just recently I saw the work of Julian Dashper online (see above). The critic said something like he’s “…driven the final stake into the corpse of painting…” Argh. Must we?

I have fond memories of going into the San Francisco Gun Exchange, being the only female in the store. The fellows would trip over themselves helping me and never charge me for any of the targets I took away.

A far cry from today! I went into several stores, finding not only lackluster targets but lackluster service. Gee, what a difference 25 years makes! The guys were like yeah, well, we only have a few and they’re over there. Help yerself....

It’s odd how the small the choice was – there used to be such an array. After all, this is gun country. You might not know it from hip PDX, but this state has plenty of people polishing their ammo out there. The trip out to G.I. Joe's was especially enlightening. I ended up out in strip mall hell. 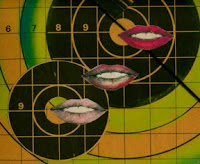 For me, it did not always have to be a circle. It’s the shape within a shape within a shape. Perhaps the fascination started at the Ashland Rifle Range, up beyond Lithia Park. Ross Sutherland and I would go up there and nick the already fired through targets and many were of the human form.
at 12:21 PM

Love your target collages. I'll keep my eye out for you. Once in a blue moon, I'll go to the gun show which also hosts an antique show. (Gotta love Texas.) Maybe I'll find some older targets there for you.

What I really want are bigger ones and ones that do not have the entire circles filled in with black. I used to get them large and open and would love to find something like that now.

Still, I have bought the small ones anyway. You never know...

Eva, I'm such a target fan, even sold a series of them that I made to Target Co. Damn Quadrophinia did me in, and of course a love of vintage modern design, and on and on. Nice to know you are a compatriot!

Wow these are really great-- I love the aesthetic!

Do you have a love for pictograms and signage as well? I know I have always had an obsession for them as well as other super-graphic things.