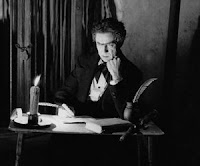 My dad, who died when I was 12 in 1968, collected old stuff as he had an antique store. Old stuff was just around. And old magazines were really around because they didn’t have any value yet. I looked at them all because we didn’t have a TV and once we did, it only had one channel. Old Bette Davis films made the most impact - and horror films like “Murders of the Rue Morgue” (above) - although I also remember “Dark Shadows.” I wasn’t cutting anything up yet. I was just looking.

The same year my dad died, I read the diary of Anne Frank. She’s the one who got me (and a million other kids) into journaling, but she influenced me in other ways too. A lot of people tend to forget – because Anne’s story was set in such overwhelming circumstances – that she was a Hollywood junkie. She loved her photos of film stars. Her walls were covered with them. And whatever Anne liked, I looked at. When I went to Amsterdam at the age of eighteen, I was curious to see if indeed Anne’s room was left just like she left it – with the photos haphazardly tacked across her walls. And it was.

In my case, it’s not like I looked at current Hollywood stars per se. I looked at the stars Anne Frank was looking at – the ones from the 30s and 1940s. And if I did care at all about current film stars like Faye Dunaway, it’s probably only because she played Bonnie, a gangster moll from another era. Same goes, a few years later, with Liza Minelli. She was of interest because she played a girl from the 1920s and especially because her mother (above, Judy Garland) was a real live movie star of superior tragic dimensions.

We were always broke so my main entertainment was the library, where I checked out every single book on old Hollywood. I found many books on old movie houses like the Roxy and I read about the debauched lives of the pre-code Hollywood set, Fatty Arbuckle and Mae West. It’s like I lived out that fantasy life all over again, just like a kid might have done in 1930.
It wasn’t until a few years later that I realized that I wasn’t alone and that I was part of a worldwide craze known as Nostalgia. Most of my cluelessness was due to the fact that my dad’s death sort of set me into a two year coma. Memories are few and bleak. But then again, the media pipeline into the sticks, into Dark Hollow Road in Southern Oregon was not that wide. All of this however was the road to lead me to photomontage.
at 10:22 AM

This reads like a poem - beautiful and touching. I wish I had a fraction of your talent with both words and images but I am truly impressed with your new work.

Thank you so much Nancy. E

Did you ever get into Kenneth Anger's Hollywood Babylon?

Yes! This is a book I read twice - once as a kid and then later when I could understand it... this is exactly what I am talking about...