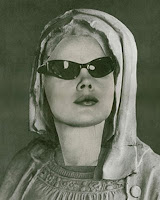 Not long ago I read a book review by Shelby Steele in the Times which discussed how one wears a mask to navigate an oppressive system. We develop various routines and armor to survive it all. The mask itself can be a real point of power and is a way for you to work a room, if not a life.

Within an oppressed group, endless discussions and arguments fly as to just which mask it should be. Should we be humble or should we have bitchy pride? The arguments cancel each other out. We can see this in any group.

As I read this brief review (of a book by Robert Norrell on the life of Booker T. Washington), it hit me like a ton of bricks that this whole mask-as-empowerment idea was key to my targets. It is why I have almost exclusively relayed objects of beauty and glamour as opposed to “Women of Distinction,” something more in line with an International Women’s Day project.

I personally have had a great deal of experience with the mask – and continue to do so, whether it was my own or someone else’s. I had the mask handed down to me from my mother; we watched Bette Davis films together. Being a makeup artist, it is something I’m a bit of an expert on – but of course it goes beyond that. When someone suggested that I could use powerful women from history like Margaret Thatcher or Amelia Earhart in a target, well, that kind of power is a relatively unknown territory.

- But I do know a bit about what it’s like to be perceived as a Sally Bowles – a fascinating “artiste” who is nonetheless a slut for doing what the guys are doing. And while some believe that the mask is “over,” an artifact of another century, a subject of another era, I disagree.

When Richard Schemmerer asked me in his interview if I was critical of the women I used, I realized that the answer comes from a dual view - for I was and am a willing participate and voyeur, and have no hatred, for all its evil implications, of the mask I have grown up with. I enjoyed punk especially because of its play and denouncement of it. When we first came on the scene, I remember people in Oregon throwing cans at us from their cars - rocks too. They thought we were some kind of weird, out-of-time hookers. The fucking around with the mask really unnerved them. And is still can.
at 9:11 PM

Oppression of one kind or another is still with us, so masks remain. Although I think it takes a while to catch up with new ones.

Concerning your own work, it's the antique, period quality to the photos that strikes me as foremost. Not just the fashions but the quality of the prints. Is this another way of building a mask for woman-as-siren?

Well, I think part of the antique quality lies in the way they are positioned - for even when I used Kate Moss, I placed her in a saint's body from the Middle Ages. So there's often a back-and-forth perspective. It's like many of them reside in more than one one time.

But I think the biggest factor is the paper itself. Paper changes over time, even new paper. It's not merely about archival issues - it's the content itself. Something even just 3 months old acquires a patina in pop culture.

Which brings me to a question - if it wasn't an original but a print you were looking at - a big digital print - how would this change your perception of the work? My dealer and I have explored this option a bit. We blew one up and it is smashing, but it is divorced from very quality you are describing.

Wilhelm Reich writes in Character Analysis (1933) about the "Character Armor" of people. Much like the mask you speak of, but more inclusive of the whole body, which "armours" itself to the outside world.

He felt cracking this armor was important in addressing latent mental and emotional issues. Getting past those issues and hang-ups we carry into adulthood.

I found his entire oeuvre to be fascinating in understanding psychology and personality.

I love Wilhelm Reich and have read most of his books too, especially People in Trouble and Listen Little Man. His idea of Orgone is a big part of the "life energy" drift in my paintings. Makes sense that it would seep into the photomontages too. As it was, I made a couple of photomontage portraits of Reich back in the 70s. Patti Smith was really into him too... did you ever read his son's book, Book of Dreams?

I guess it depends on the resolution or fidelity of the print. If you can still see the aging to the paper - the discoloration and the dot screen resolution etc to the original print - then these things are still foremost for me - even if it's a digital print - it's 'talking about' or showcasing this yellow press iconography.

Also it would mean you wouldn't have to cut up the originals, but could re-use or re-combine them, digitally in more works! But of course you could still do that with those you have collaged, hard-copy, as well.